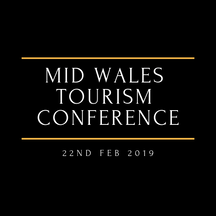 The Mid Wales tourism industry has delivered a clear message of unity with a positive outlook for the year at its annual conference held at The Metropole Hotel, Llandrindod Wells.

Featuring a stellar line-up of speakers including Irene Roberts, Director UK & Ireland, Expedia Group, the Mid Wales Tourism Conference, organised by MWT Cymru, was held just a month before Britain leaves the European Union and, despite the uncertainty, the local tourism sector was encouraged to be positive and to step up its marketing to promote the region as a world-class leisure destination.

“At Expedia, we are relatively optimistic about the future,” Mrs Roberts told more than 120 delegates in attendance. “There will be challenges but also opportunities.

“People still want to travel, whether that is domestic or international, and Mid Wales has so much to offer. The market can be currency driven so the weak pound provides big opportunities for this region.”

She said that Expedia Group witnessed a 20% growth in the number of room nights booked in Wales during 2018 with sharp increases in visitors from emerging markets including China, India and Japan. There were also surges in bookings from European countries like Germany, France, Italy and Norway, with a 54% rise in customers booking a package of both hotel and transport in Wales.

Despite the current headwinds caused by the Brexit uncertainty, tourism officials were in buoyant mood with Lucy Von Weber, Head of Marketing at Visit Wales, highlighting that 2019 is the Year of Discovery for Wales with a far reaching marketing campaign promoting the country.

Steve Hughson, chair of the Regional Tourism Forum (Mid Wales) and chief executive of the Royal Welsh Agricultural Society gave a rallying call to “make Mid Wales the next big thing” by encouraging the local industry to work closer than ever before.

“It is the people that make it work,” said Mr Hughson. “Let’s be innovative about the way we work to promote Mid Wales. We must also do more to stop the skills drain from leaving the area, and if young people do leave then we should encourage them to return home with their new skills and experiences.”

In his opening address, MWT Cymru chairman Rowland Rees-Evans said that the consequences of Brexit “would be felt in these precarious times” but also called on the sector to embrace the spirit of the #RealMidWales campaign which, according to MWT Cymru chief executive Val Hawkins, makes Mid Wales the “truly unbranded travel destination for escapist dreams”.

“Mid Wales is targeting tourism growth despite Brexit uncertainty as our individuality makes us stand out,” said Mrs Hawkins. “Our #RealMidWales campaign highlights the natural beauty of our region so we have worked hard on developing our visual signature through high quality imagery and video.”

Mrs Hawkins praised the four Slow TV projects in 2018 which involved a static camera streaming live on social media for eight hours from a chosen location. The streams reached almost 600,000 users and are likely to be repeated from more locations in 2019.

The conference was sponsored by NFU Mutual, Guestlink Online Tourism Solutionsand Pear Communications and also featured a number of exhibitors.

It is organised every year to give businesses a clearer idea of what's going on, what's changing and what they can all do to better work together to keep Mid Wales at the forefront of the industry.